Here, July 4th is “Liberation Day” and marks the end of the genocide in 1994. The word “Kwibuka” is used, meaning “to remember”. On this day the country comes together to remember what happened and those who are no longer with us.  Every year, thousands of people pack into the Amahoro stadium in Kigali to witness military shows and the president’s speech. The whole country tunes in to watch the event on tv or listen on the radio. The sports stadium itself has great ties with the genocide, as it protected 12,000 Tutsis in 1994.

As we are in Kigali, the Glasgow team and a few of the Rwandan girls set out early to get to the stadium at 7am. Once the president is on the move to the stadium, all roads close so it’s important to get there in time! The event started with a military and police procession, and a huge marching band. The military remained on the pitch of the stadium, in perfect formation, as the various presidents and leaders of many African countries began to arrive. These leaders came to witness the celebration and give their respect and support to the country of Rwanda. Many more leaders from around the world were unable to attend, and instead sent their respects. The final person to arrive was His Excellence, the president of Rwanda, President Kagame. While he has been president since 2000, he was the leader of the Rwandan Patriotic Front, the rebel force that ended the genocide, and thus greatly loved and respected by the people of Rwanda. The event lasted several hours, with speeches and demonstrations from various national dance and music groups. The president gave a long speech concluding with the following quote “We left the past behind us and embraced the future by coming together as a family. We must remain solid in defence of these values through each and every generation. We will not lose our way again”. After this, the president and various leaders exited the stadium followed by the military procession and then at last the gates of the stadium and the roads opened and 30,000 people streamed out of the stadium to go home (naturally there was quite some traffic). 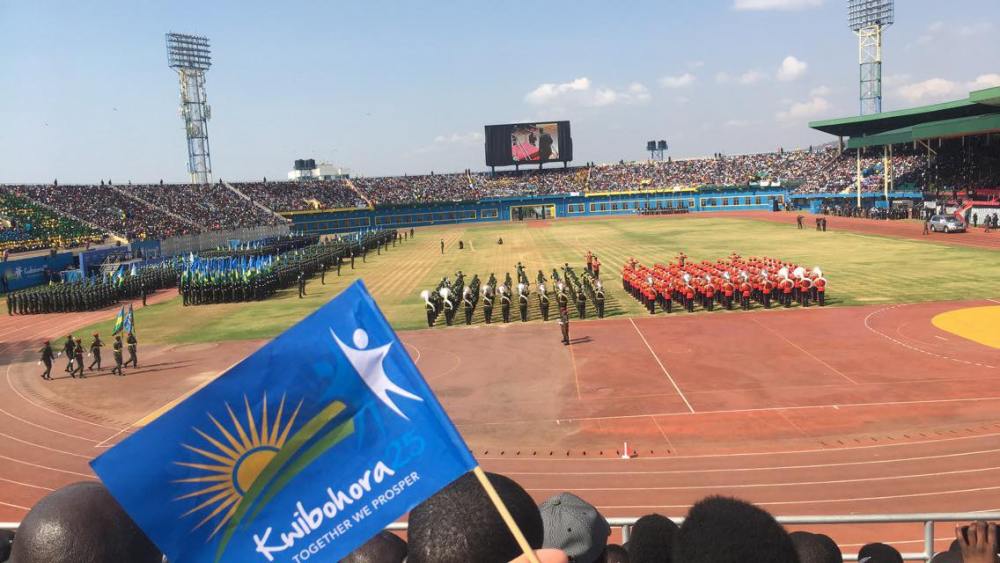 After lunch a few of us went into town to the markets to buy some souvenirs and gifts for the Secret Santa exchange between the Rwandan and Glasgow teams. With the help of a few of the Rwandan girls, we did some haggling to get a good price. After a long and exhausting day in the sun, with all of us managing to get a bit sunburnt at the stadium, a good meal for dinner was much appreciated.